A tub fit for a prince

Deep within Tasmania’s lush forests rests the prince of all Tasmanian timbers- Huon Pine. A conifer, Huon Pine is renowned for its exceptional durability, workability and beauty; the envy of Australia’s craftsmen and timber enthusiasts. In 2021, craftsman Emanuel ‘Manny’ Oppliger of Wood + Water, was commissioned to use this timber to make a custom piece in a private residence. While Huon Pine furniture has always been prized, Oppliger’s specialty lies elsewhere- in making custom handcrafted timber bathtubs. 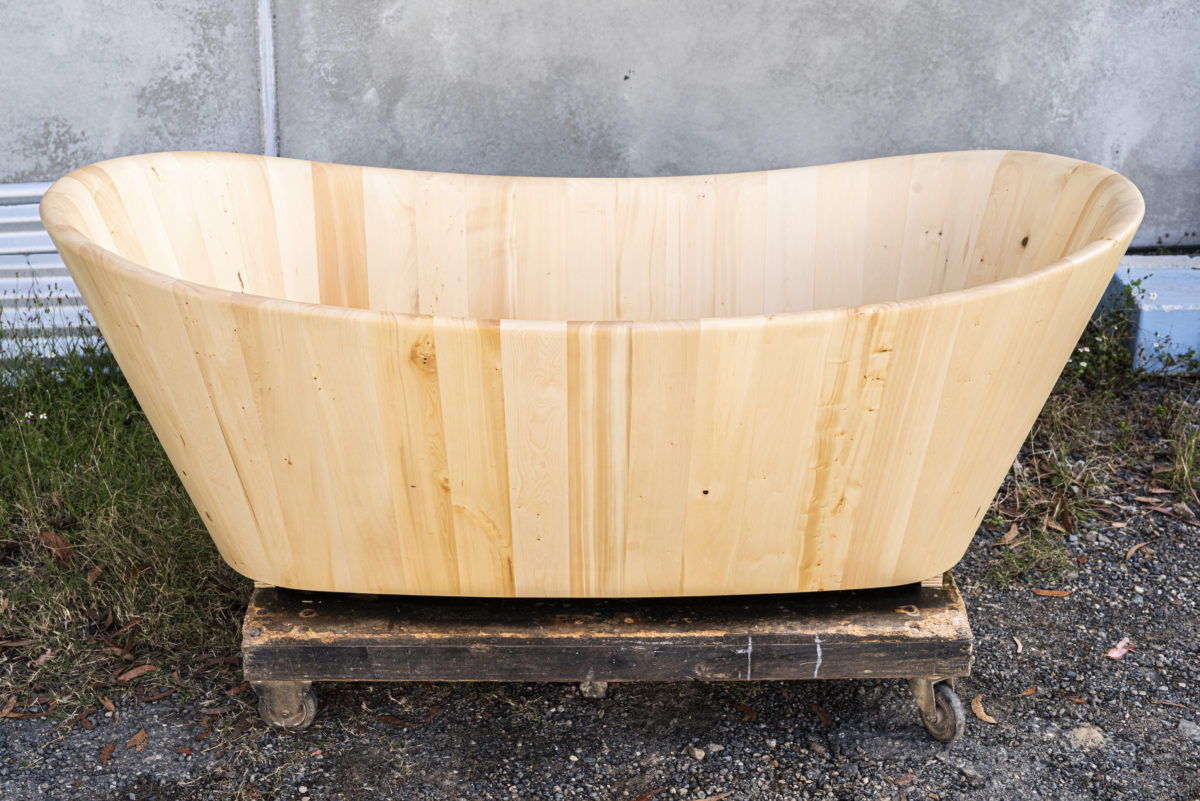 Moving from Coffs Harbour, Australia to Papua New Guinea as a child, Oppliger crossed seas again at the age of 16 when he moved to Switzerland to learn the crafts of carpentry and joinery. Honing his wood working skills while being guided by some of the best in the trade, Oppliger built his first timber tub for a friend in Switzerland before departing and setting roots back in Australia in 2009.

Experimenting again with crafting tubs from timber, Oppliger created mini tubs to bathe his own newborn children in, which proved to be a success when larger versions were showcased in a local showroom and quickly disappeared. Approached in 2016 to make one of his timber tubs to be featured on the TV series, The Block, the design was a massive success when it was incorporated in the show’s winning bathroom, helping the show’s contestants go on to win that season. Following success from the show, Oppliger has been busy crafting timber tubs for clients throughout Australia and beyond, including his recent Huon Pine tub.

“It was my first-time crafting anything out of Huon Pine. I was slightly aware of the timber’s fame when the project was first commissioned but after telling other craftspeople in the industry and seeing their excited reactions, I did some more research and then knew how truly lucky I was to be able to work with this timber,” says Oppliger. 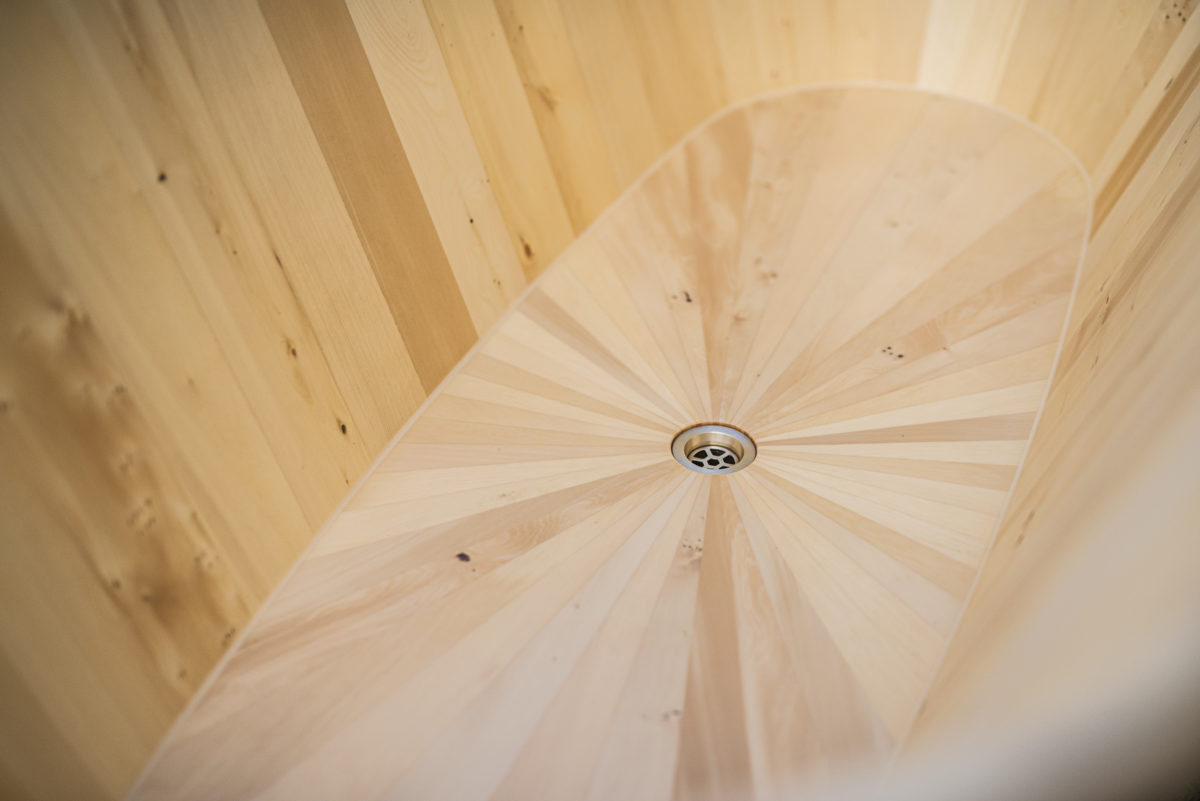 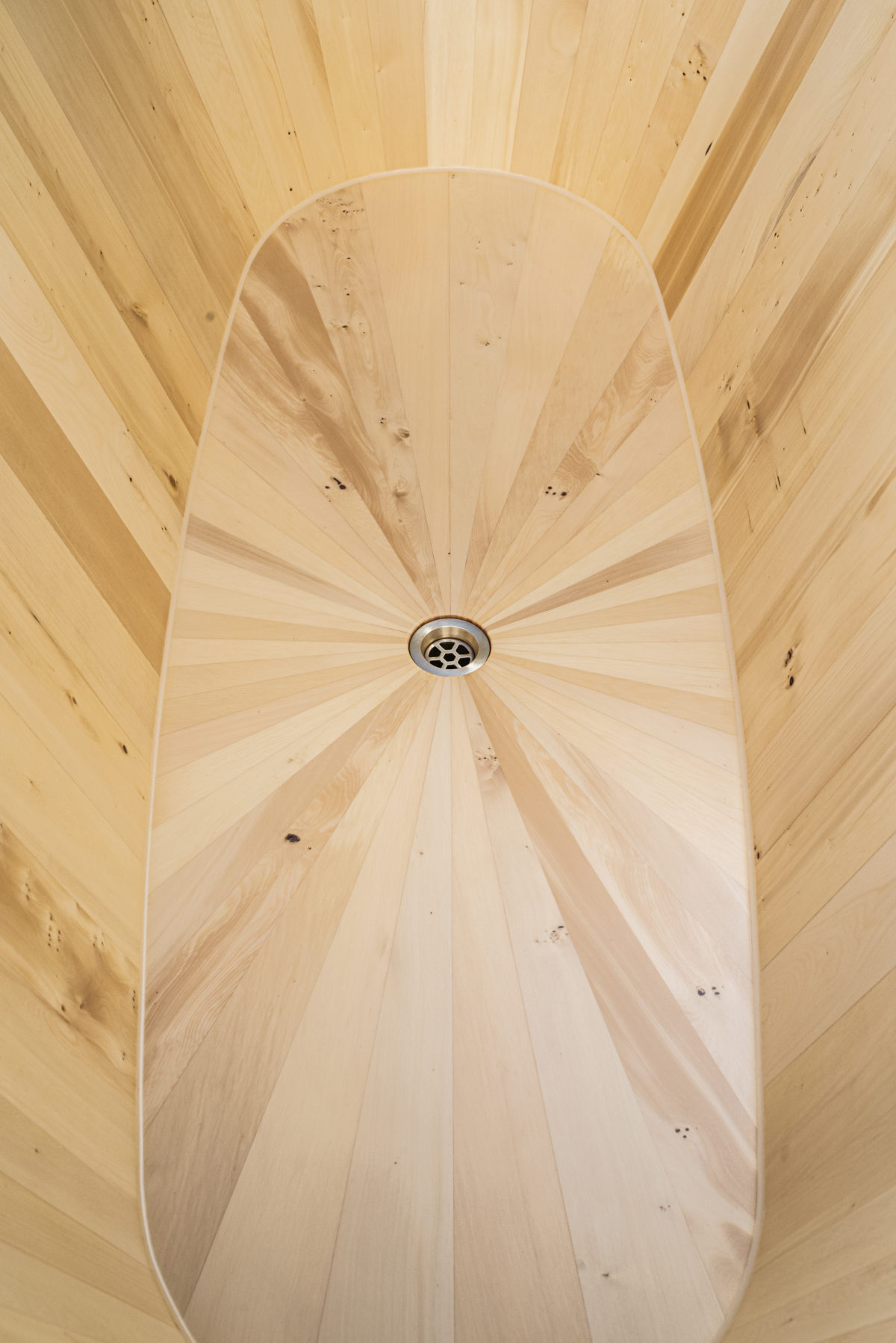 Supplied by Tasmanian Timber supplier Britton Timbers, the Huon Pine tub consisted of over 100 pieces of individually cut timber joined in an intricate pattern to form a perfectly rounded tub. Using a unique, multi-layer coating adapted from boat building, this was then applied to the tub to deliver complete water resistance and protecting the wood from scratches and UV light as well as bringing out the grain from the famed timber, giving the finished piece depth and texture.

“There’s something about the warmth of timber that’s attractive in appearance, especially when used in a colder, flat environment like a bathroom. Timber breaks the space up and warms the space up.”

“Crafting with timber really allows you to approach the overall design of a space in different ways. Shaping a tub into a rectangle with sleek and defined lines offers a modern look while crafting a tub in a curved and rounded style, like the Huon Pine one, creates a softer look. Even playing with the finish or stain creates a different style, which you can’t get from any other bathtub material,” says Oppliger.

Huon Pine is a slow growing legend that reaches heights of 30m and 1m in diameter, and a tree of this size could be one thousand years old. Study of the growth rings of larger and older pieces (dendroclimatology) is even being used as one means of determining trends in global climate change. Today, the quality of Huon Pine continues to be recognised, but its supply is carefully nurtured and controlled, almost all forests are reserved and the resource that is available today comes from logs salvaged from rivers, the forest floor and areas inundated by hydro-electric schemes like Hydrowood from Lake Pieman.

While using Huon Pine was a first for Oppliger, he’s no stranger to using other Tasmanian species.

“I love working with Tasmanian timbers. They’re much easier to work with compared to some of the other popular Australian timbers. The choice of timber ultimately comes down to the client’s preference but I always try and use local timber for cost efficiency and aesthetics.”

“Using local timber like Huon Pine or Tasmanian Oak helps feed the unique story I have to tell. When I explain to people what I do for a living, people tend to give me a weird look because what I make is slightly unheard of. But it’s unique product that’s been handcrafted right here in Australia and that’s something I’m proud of,” says Oppliger. 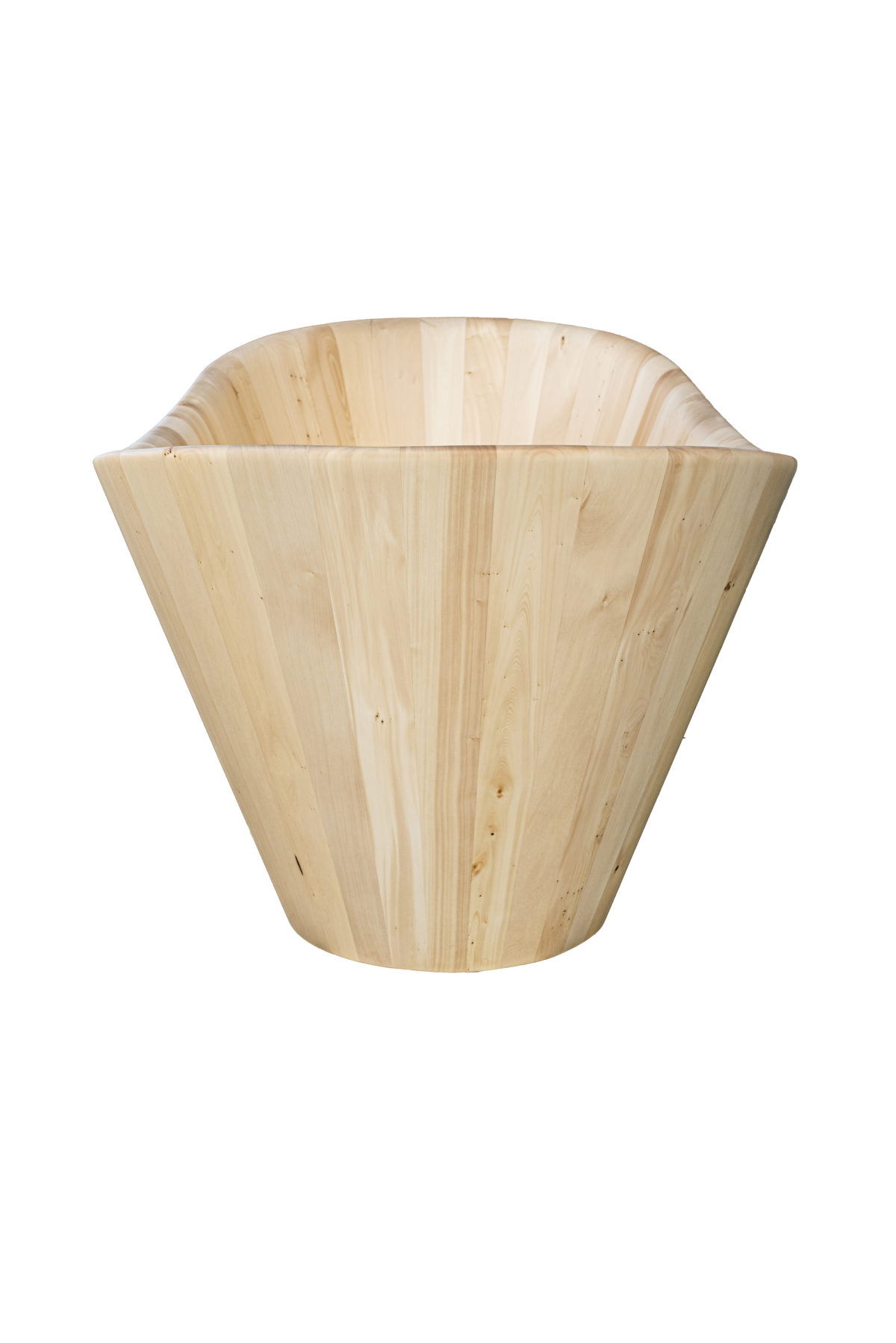 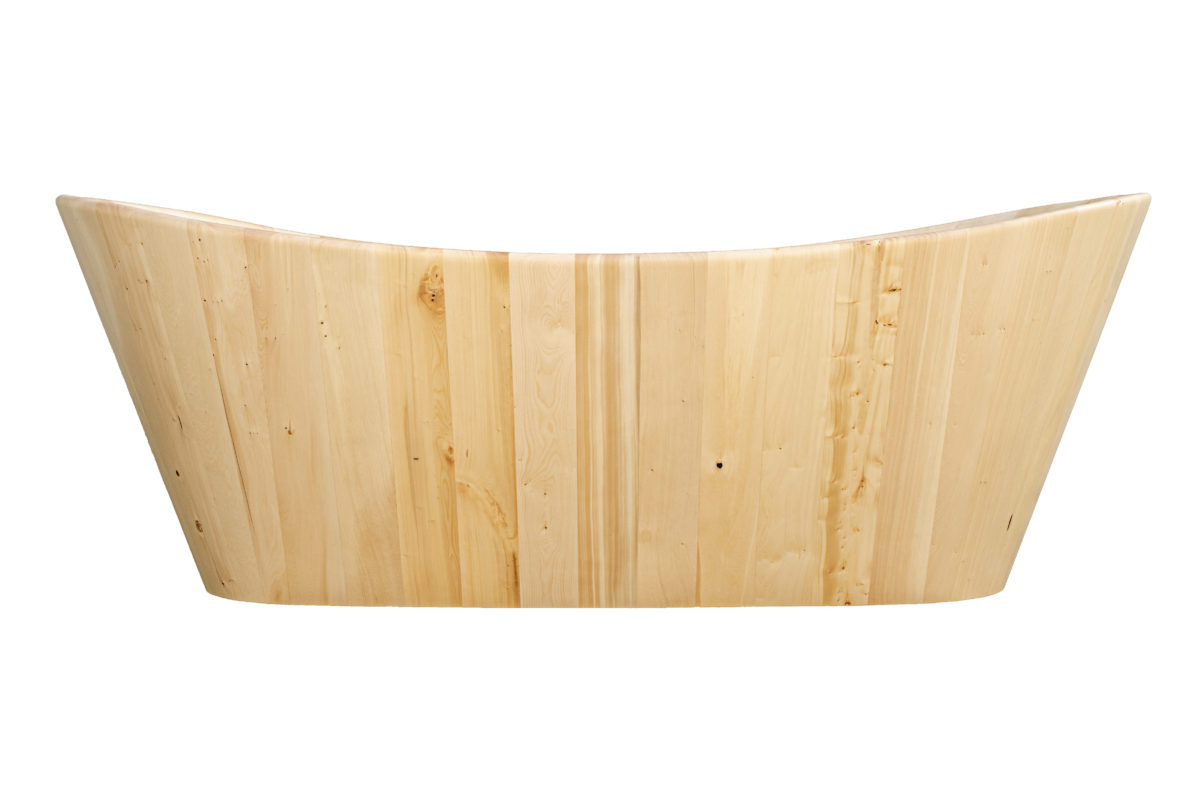 Business needs to lead for our climate, and buildings are low hanging fruit

The recent IPCC report highlighted that we must urgently transition to a low carbon future. If Australia wants to limit global warming to 1.5°C, as per the Paris Agreement, it must reach net-zero emissions by 2035. With buildings accounting for around one fifth of Australia’s emissions when electricity use is taken into account, improving the sustainability of new and existing housing is low hanging fruit.

Working as an architect for 15 years, and in the profession for 18, Kate Symons’ focus has always been on one thing: the client. Customising and creating bespoke residential homes has been her specialty. After 5 years of co-directing architectural practice MGA.I, in the midst of 2020, Symons established her very own Hobart based practice, Studio ilk.

From tip to toe, Van Bone is a tribute to all that is good in Tasmania

A cruisy 50-minute drive outside of Hobart’s CBD towards the Tasman Peninsula sits Van Bone restaurant in Marion Bay. Upon arrival to the venue’s lush grounds, if your breath’s not taken by the area’s stunning scenery and million-dollar views, the new restaurant’s end to end dining experience surely will.

Tasmanian veneers have long been sought after for a variety of applications with some stunning examples of the capability of the product in beautiful furniture and custom doors and cabinetry. Veneer has traditionally been revered for its uniformity. The matchless repetition created by thinly slicing timber from one larger piece was sought after for cabinetry and linings, particularly in large commercial fitouts.